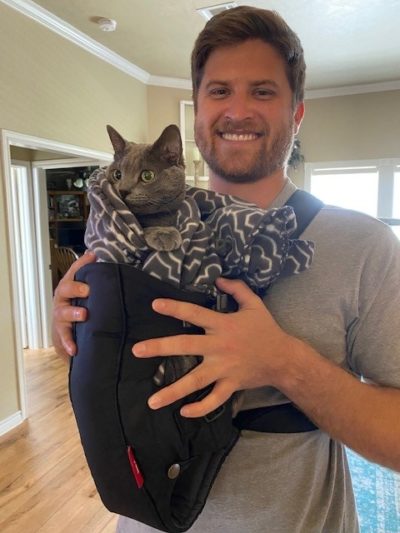 “My project uses various hybrid cat breeds to identify and understand the genetic basis for inviability and/or infertility often observed in the hybrid offspring of closely related species. However, many of the regions previously involved with these hybrid conditions are incomplete or missing in current assemblies because of sequence complexity and large differences in the haplotypes of diploid individuals. To address this issue, we are using long-read sequencing and F1 hybrids to produce near-complete single haplotype assemblies for various cat species including the domestic cat, Asian Leopard cat, Geoffroys cat, lion and tiger.”

What is at least one big lesson you have learned in the Genetics graduate program that you think is widely applicable to your future pursuits?

It’s not so much a lesson, but I’ve become more effective at documenting my day-to-day operations and ideas in a work journal. In science, particularly bioinformatics, its really important to develop an effective tactic for organizing data and keeping track of previous analyses, what version of the software was used, and how they were run. This not only acts like a lab notebook, but also makes writing the manuscript later on that much easier.

When and how did you realize that you wanted to study Genetics?

I have been fascinated with biology and creatures for as long as I can remember. Growing up farming presented me with many of opportunities for feeding this interest through observations of wild species in addition to growing transgenic crops like cotton and observing the success of different wheat varieties from year to year. It wasn’t until halfway through my undergraduate career that I recognized genetics as the underlying mechanism for almost all biological phenomena and the rest, as they say, is history.

What is your favorite thing about life in College Station?

Do you have any hidden talents? If so, what are they.

I don’t really think of it as a talent, but I am familiar with taxidermy and associated practices like skeleton cleaning and articulation. I’ve mounted several duck species and when I was in high school I had my own dermestid beetle colony, which unfortunately, I could not convince my roommate to let me keep in our dorm.

Do you have any pets? If so, please tell us about them.

Currently I have a 75-gallon fish tank composed of mostly live plants and a handful of random tropical fish. I also have a sassy grey cat named Gracie (or grey-c) that makes cameo appearances in most of my presentations.